The Republic of Cape Verde (pronounced /ˌkeɪp ˈvɜrd/ Portuguese: Cabo Verde,pronounced [ˈkabu ˈveɾdɨ]; Kabuverdianu: Kabu Verdi) is an island country, spanning an archipelago located in the Macaronesia ecoregion of the central Atlantic Ocean, off the coast of West Africa, close to Mauritania and Senegal.

It is slightly over 4,000 square kilometres (1,500 sq mi) in area, with an estimated population of over 500,000. The capital of Cape Verde is Praia. The previously uninhabited islands were discovered and colonised by the Portuguese in the 15th century and attainedindependence from Portugal in 1975.

Cape Verde is classified as a developing country since 2007. About 20% of the population lives below the poverty threshold. Having scarce natural resources, it was in the past an important location in the maritime commercial routes through the Atlantic (between Europe, Africa and America), but currently its economy is mostly service-oriented, with a growing focus on tourism, which benefits from the islands’ warm climate throughout the year.

Politically, the country is a very stable democracy, having been distinguished several times among African nations for its stability (no wars were ever fought in its territory), constant growth, and improvement of living conditions, despite its lack of natural riches.

Before the arrival of Europeans, the Cape Verde Islands were uninhabited. In 1462,Portuguese settlers arrived at Santiago and founded a settlement they called Ribeira Grande (now called Cidade Velha, to avoid being confused with the town of Ribeira Grandeon the Santo Antão island). Ribeira Grande was the first permanent European settlement in the tropics.

Farming, the main economic activity, is severely limited by the small annual rainfall and extensive soil erosion; more than 80% of the country’s food must be imported. Cape Verde has considerable underground reserves of water, but extraction has proved extremely costly. The main crops are bananas, corn, beans, sweet potatoes, sugarcane, coffee, and peanuts. Goats, hogs, cattle, and sheep are raised. Tuna and lobster are the main catches of a small but potentially rich fishing industry. Salt is extracted and there are unexploited gypsum deposits. The islands’ industries include food processing, salt mining, ship repair, the manufacture of shoes and clothing, and tourism, which is increasingly important to the economy.

The islands carry on a small foreign trade, mostly with Portugal, Spain, and other European Union countries; the annual cost of imports is usually much higher than export earnings. The main imports are foodstuffs, industrial products, transportation equipment, and fuels; the leading exports are fuel, shoes, garments, fish, and hides. Cape Verde’s expatriate population is greater than its domestic one, and remittances from emigrants living in the United States, Portugal, and Africa constitute an important supplement to the islands’ economy.

Cape Verdean social and cultural patterns are similar to those of rural Portugal and Africa. Football games and church activities are typical sources of social interaction and entertainment. The traditional walk around the praça (town square) to meet friends is practiced regularly in Cape Verde towns. In towns with electricity, television is available on two channels (Cape Verdean and Portuguese). 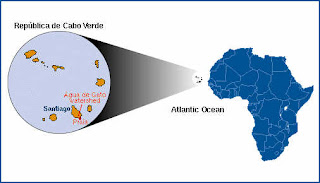 Notes from Wikipeda and Answers.com